Hockey isn't nearly as popular as baseball or soccer in Korea, so there really isn't a venue to regularly watch hockey while I'm there. As I followed the news from afar about the new ownership of the Carolina Hurricanes, I eagerly counted down the days until I could not only be home to see my friends and family, but catch my first game of the season under the new regime. Maybe it's because I've been gone and I hyped it up in my head, but stepping into the rink this year just felt different. It had the energy of a renewed team and staff, ready to take on the rest of the league with no holds barred.

My fourth year of the behind-the-scenes tour with Vice President of VAB Catering, Chris Diamond, renewed my hope not only for the team, but also for the fans. On previous tours with Chris, he told us of the goals they had to keep updating and adjusting their food service to give the fans of the league an entertaining experience, on and off the ice. This includes offering a variety of food options to make it allergy-friendly, including ingredient/allergen reference binders at each concession stand.

Walking around the arena with Chris, the visual changes to the concourse were evident. Menu item offerings had consolidated for efficient service, serpentine queues put in place to reduce concourse congestion and one of my most-anticipated additions: the Game Day Marketplace. This convenience store-style set up offers up a multitude of beverages (alcoholic and non-alcoholic), snacks, fresh fruit (yes, it's only $1!) and general sundry items you may need along the way. The idea is to get you what you want and in less time than it takes for the puck to drop after intermission. 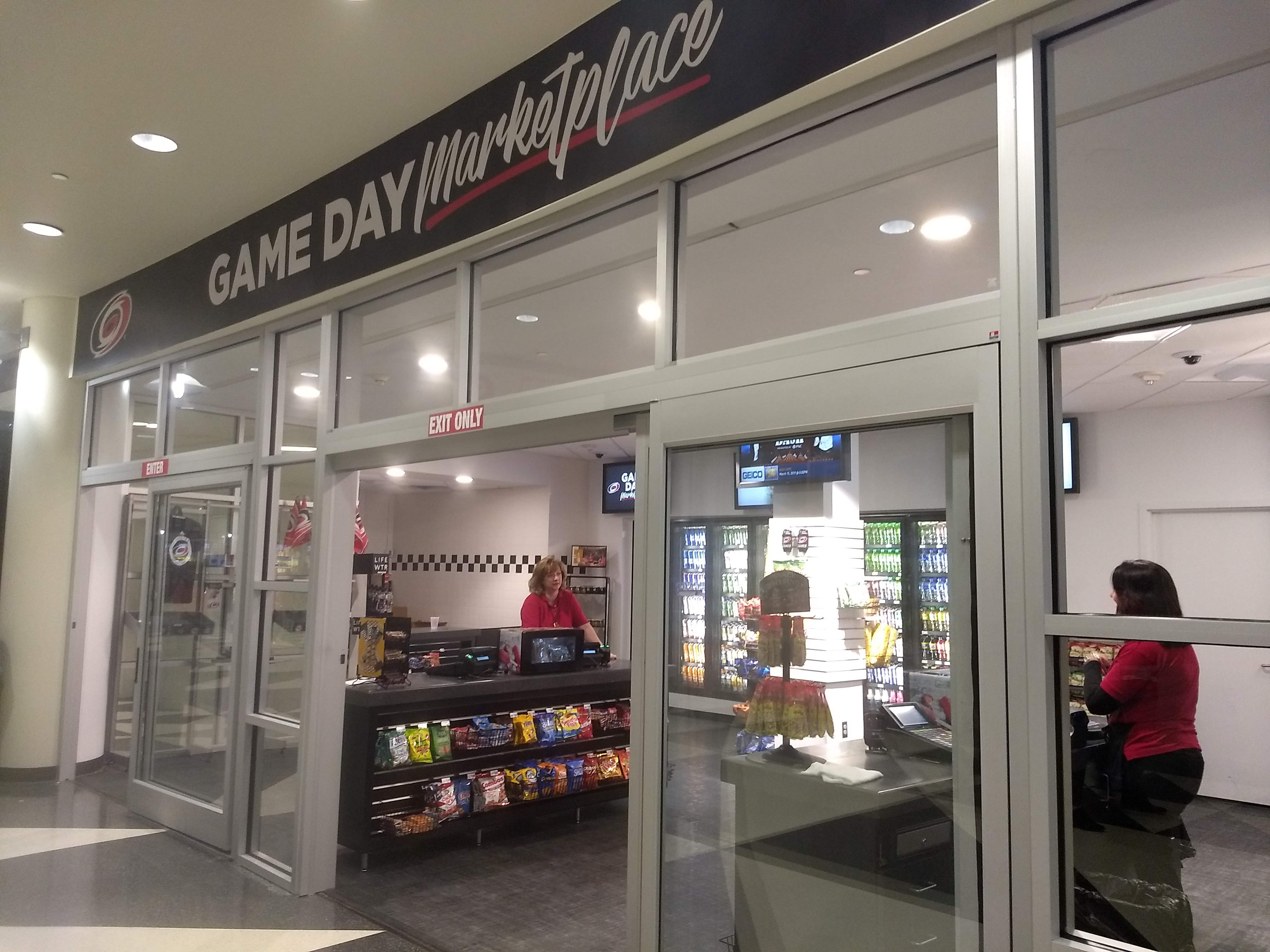 Game Day Marketplace: all your game-day needs in a convenient spot

The 2018 Carolina Hurricanes season kicked off with not only the continuation of the Hurricanes Homegrown series, but the inauguration of the All-Star Chef Series. This new adventure pairs a four-course meal tasting from a curated collection of North Carolina's premier chefs with tickets to a Carolina Hurricanes home game at PNC Arena. This new dining event, which also features signature cocktails from guest bartenders, is available prior to six Hurricanes home games during the 2018-19 hockey season. 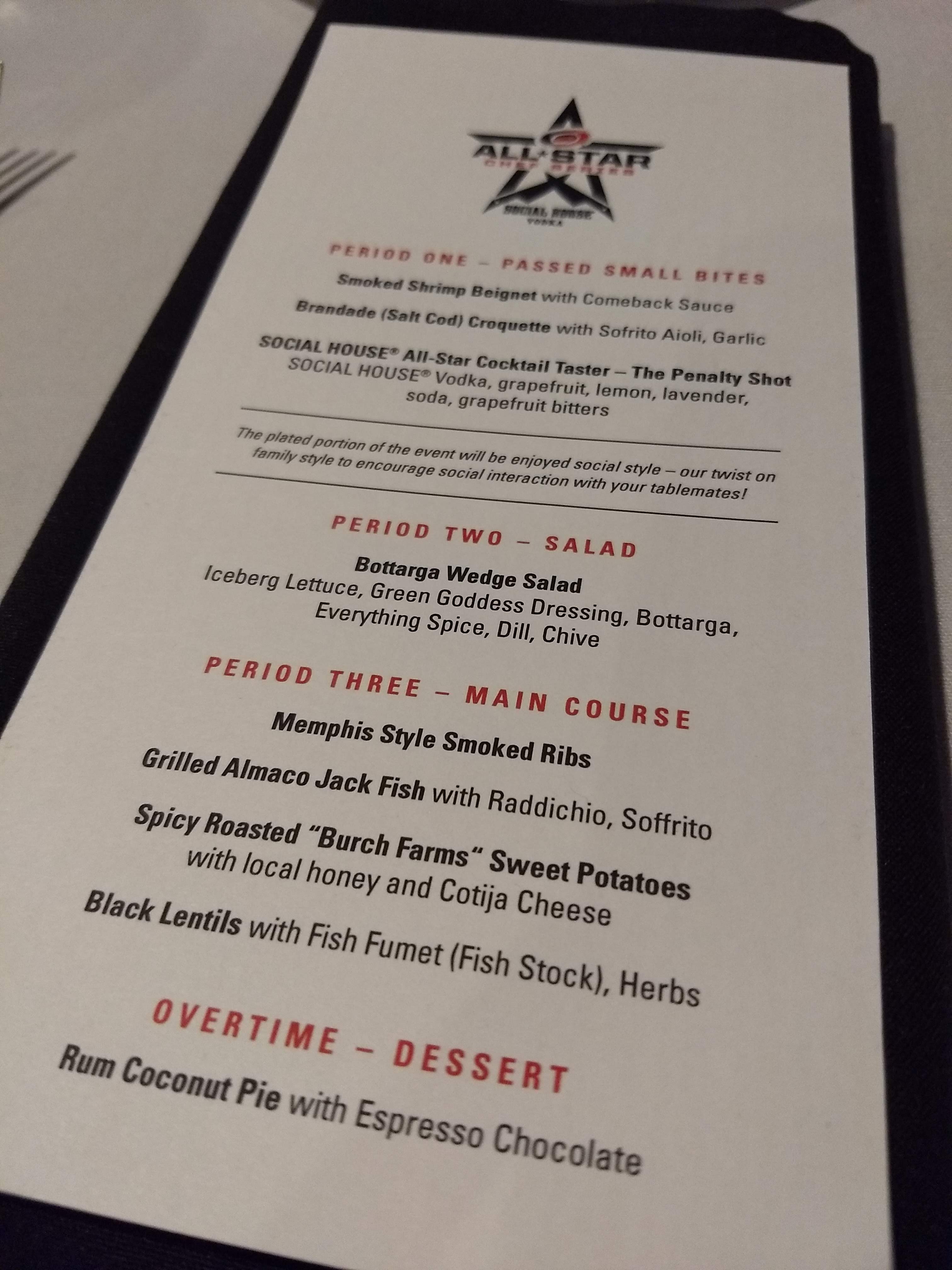 Chris invited myself and a guest to partake in this new dining series and it was an unforgettable evening. It combined my two loves: food and hockey. We enjoyed a dining experience prepared by Chef Eric Montagne from Locals Oyster Bar and Chef Matthew Register of Southern Smoke BBQ of NC. Chef Eric's Black Lentils with Fish Fumet and Herbs was a knock out. I think lentils are underrated and underutilized, so I was more than stoked to have them combined with a fragrant and rich fish broth. Elliot of Eat Raleigh and I were the only ones at our table who really dived deep into this humble treasure. Chef Matthew's Memphis Style Smoked Ribs were just what you want from ribs. Perfectly smoky, tender enough to bite off the bone without them falling off and just enough sauce to have to lick your lips after each bite. As if this feast weren't enough, we ended the meal by happily walking to our center ice seats with full bellies and ready to cheer on the Canes. 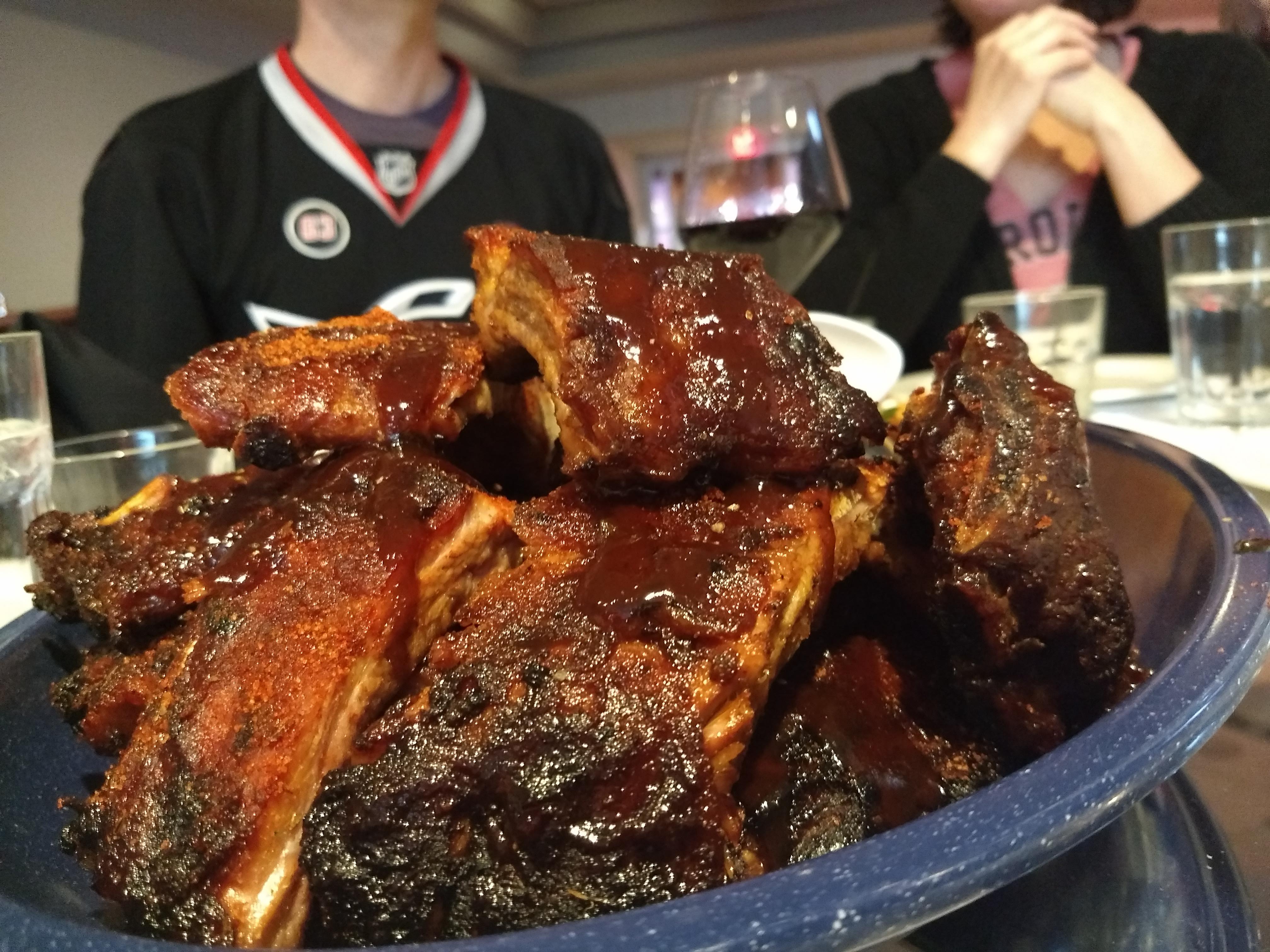 There are two remaining All-Star Chef Series dinners this season on Saturday, March 16th and Thursday, March 28th. This is really the perfect date night, girls night out, boys night, whatever you want to call it event! The food is always going to be top-notch and what's more exciting than a hockey game? More details and ticket information available here. Thank you again to Vice President of VAB Catering, Chris Diamond, for the private tour and tickets.

« Build Your Own Bibimbap
Carroll's Kitchen »