As fall has settled in and the leaves are turning, I'm thankful not only for the cooler weather, but also for hockey season! I'm an equal opportunity hockey lover, but I have a soft spot for both the Detroit Red Wings and Carolina Hurricanes. As the 2017 NHL season has officially kicked off, it felt like Christmas as I was able to follow around Chris Diamond for the third year right here in North Carolina. He is the Vice President of VAB Catering, the company responsible for providing food for all PNC Arena events, including Carolina Hurricanes games. Chris has shown me all the new food options with each passing year, as well as the advancements they've made to enhance the attendee experience.

You may be shocked to know PNC Arena's food provider, VAB Catering, makes nearly all of their menu items, from scratch, in house. You can learn more about the extensiveness of their operations in two of my previous pieces here and here. This year, I wanted to give a little more love to the health conscious options around the arena and what VAB Catering does to give back to the food community.

"Health conscious" might not be the first two words that pop into mind when you're heading to a hockey game. All the same, I use those words together to describe food options that can fit any food allergy or any dietary choice. We all have different needs and VAB Catering doesn't let you down whether it's something vegan, gluten free or anything in between. The quick answer when you're on the main concourse is to head to Market Place at section 126. Panini of the day, soup of the day and a hummus tray are just a few items that offer something out of the ordinary and meet several dietary needs. 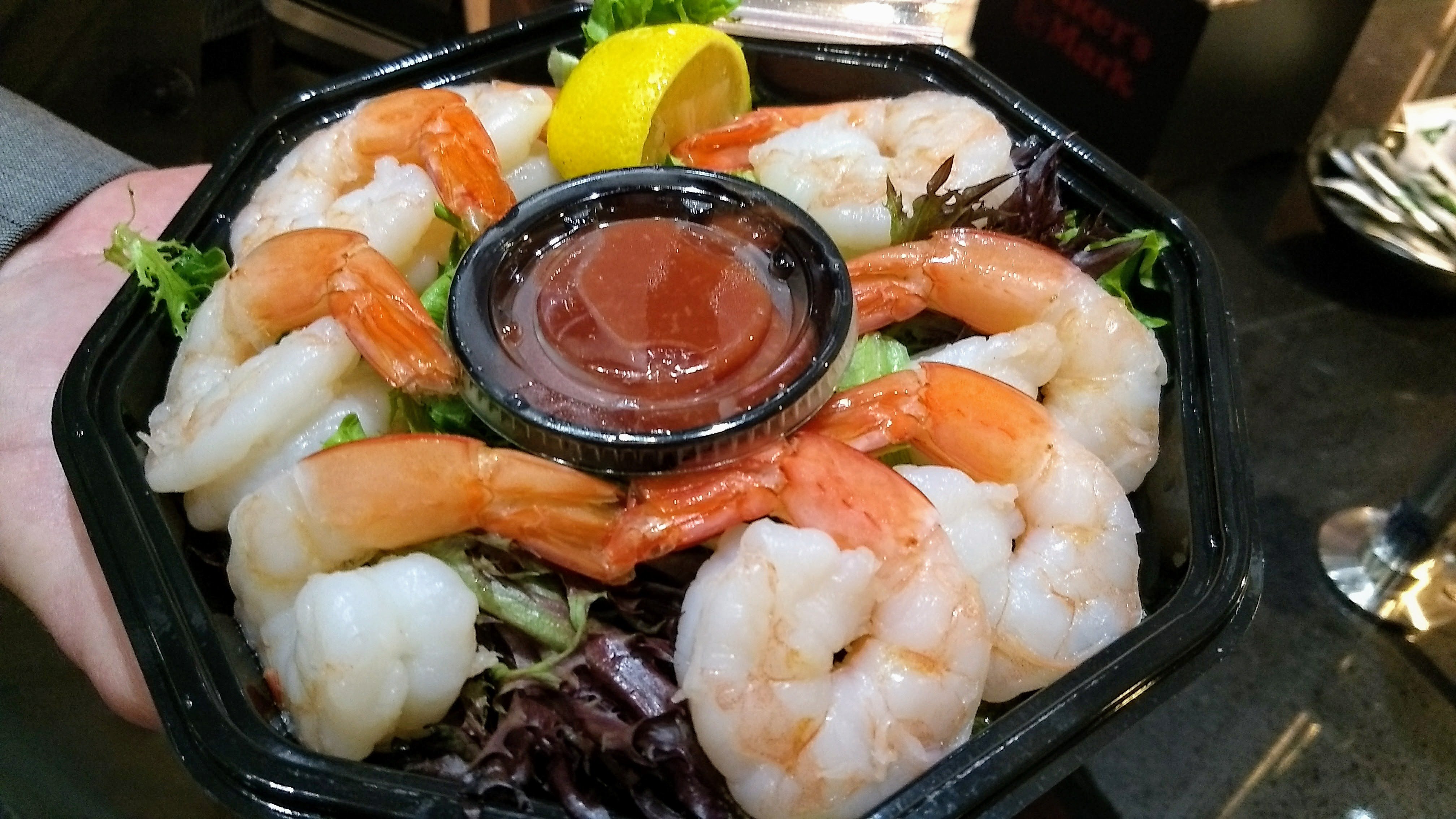 When in doubt, Chris says to just ask! Not many people are aware that every concession stand in PNC Arena has an Ingredient and Allergen Guide. Just ask to see the guide so you can peruse and decide which items may be safe for you to eat and meet your needs. If this proves unhelpful, ask again! Chris says the good thing about being an in-house catering company is the ability to make meals from scratch. This means you can talk to the chefs directly so they can craft a meal that is custom made to meet your needs. Don't be afraid to ask! 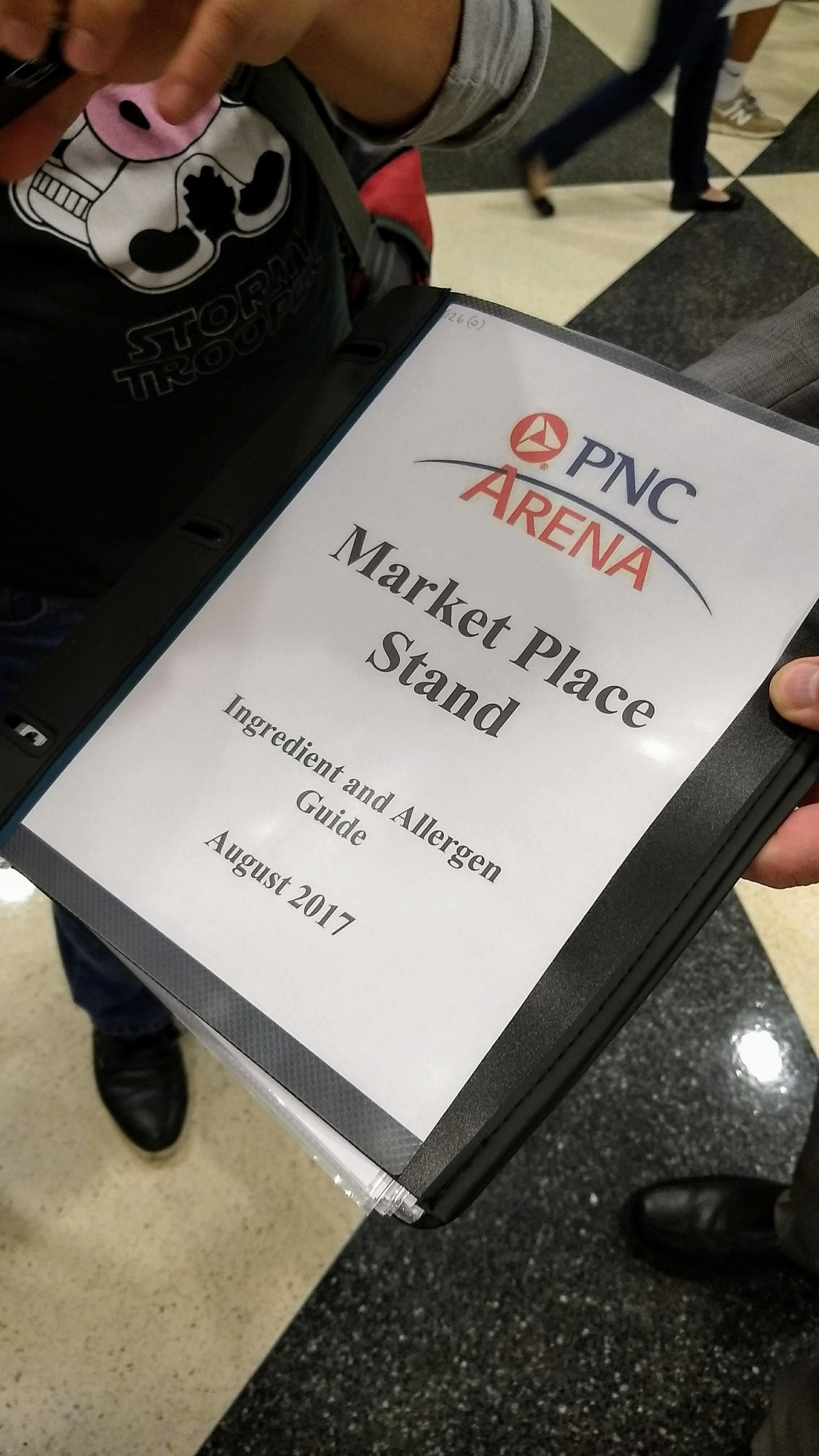 Sustainability is a hot topic and an entertainment arena isn't immune to the trends of the world. The sheer volume of food that's prepared for thousands of attendees at any Carolina Hurricanes game is astonishing. The Carolina Hurricanes are participants of the NHL, Rock and Wrap It Up! program. The NHL, Rock and Wrap It Up! initiative launched back in 2010 as a way to address the large amounts of food leftover after games, but still completely safe to eat. The Carolina Hurricanes are part of this action, but PNC Arena has been donating food to the Inter-Faith Food Shuttle program for well over ten years. In the last fiscal year alone, PNC Arena has donated over 7800 pounds of food to them; that's equivalent to over 6500 meals!

Chris and his staff have already implemented several new menu items and processes since last season's walk through. His hunger for progress is clear, as his next project includes constructing a new-to-arenas style of dining that will increase the number of choices in a condensed area to expedite service. I can't wait to see what next season brings for us! As always, a huge thank you to Chris for the complimentary tickets and personal tour of PNC Arena.

« Recap of FNCE 2017 in Chicago
Hottest Chefs of the Triangle »