Thanksgiving break included not only a visit to see family, but also the amazing opportunity to see the ins-and-outs of the new Little Caesars Arena in downtown Detroit. This mammoth houses the Detroit Red Wings, Detroit Pistons and many other entertainment acts throughout the year. We received an all-inclusive tour from Mike Berend (Director of Hospitality) and Tim Martin (General Manager). With a combined career total of over 50 years in hospitality, it's safe to say these guys know just what it takes to successfully run an entertainment arena seating anywhere between 19,500-20,000 people, depending on the night. 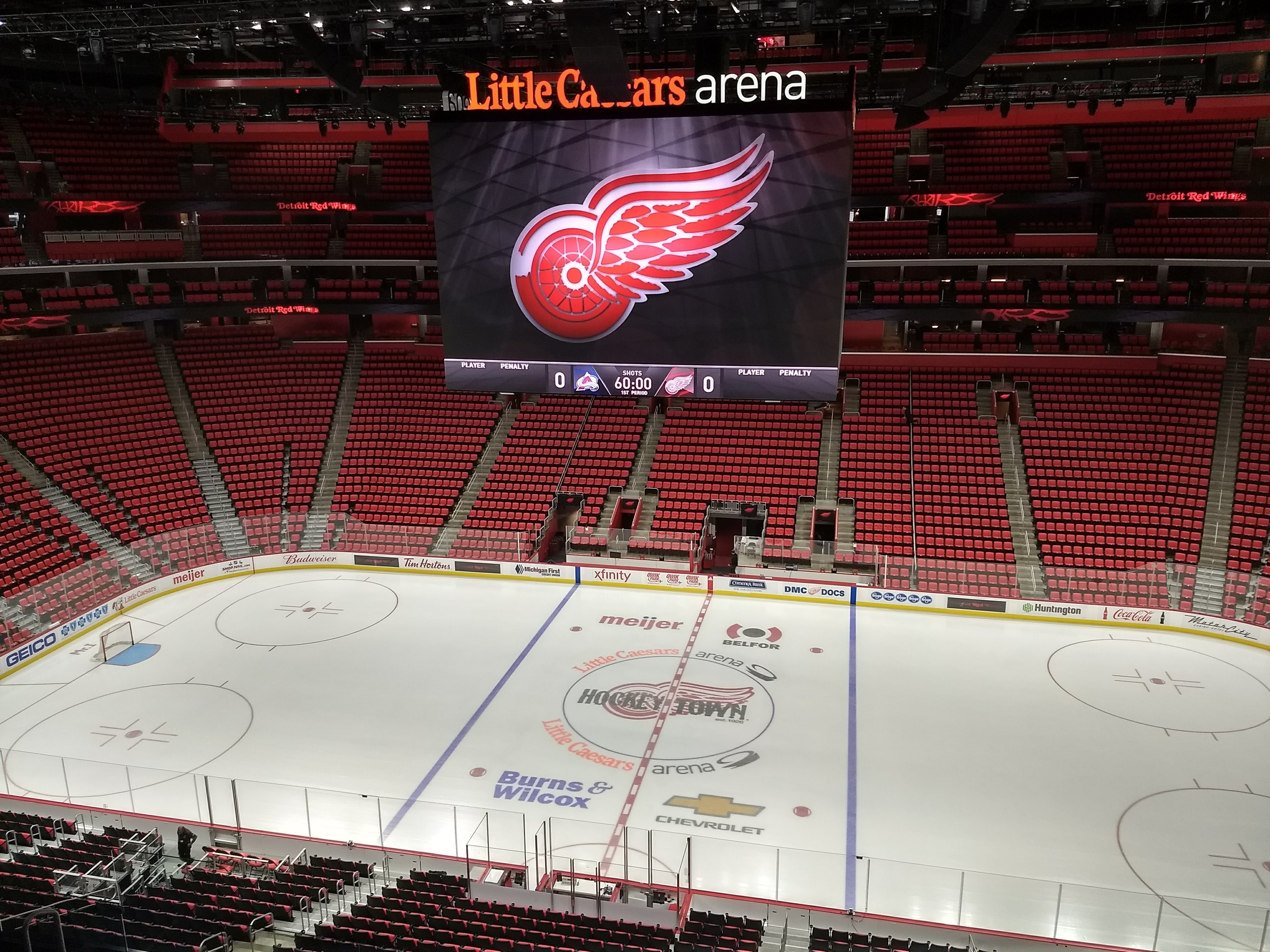 Pristine arena prior to puck drop

This season marks the 100th anniversary of the National Hockey League (NHL), which has given fans many years to admire stadiums across North America while watching one of the most exciting sports, ice hockey! What better way to celebrate this momentous year than by opening the doors of Little Caesars Arena. After attending a game and then receiving the tour, it's certainly any die hard Red Wings fan's heaven.

Mike and Tim both work for the arena, but hospitality operations are ultimately run by Delaware North. Tim shared that Delaware North is a company focused on culinary inspiration and talent. All chefs employed by the company must be certified in order for them to maintain the quality of their operations around the world. This is evident in the many company-branded restaurant concepts throughout Little Caesars Arena. Delaware North initially started selling popcorn at movies before branching out to the original Tigers stadium to sell hot dogs and popcorn. This partnership was Delaware North's first Major League Baseball client back in 1930 and it really is something to see them still working together nearly 90 years later.

From top to bottom, this eight-floor arena covers everything you could ever fathom of needing at a game, concert or event. Upon driving up to the stadium, it's visually unlike any other stadium I've been to. The exterior is brick, blending in seamlessly with the other downtown buildings. Once inside, you feel like you're walking around a mall, as the arena itself is set back, giving patrons plenty of room to peruse and walk around looking at the restaurants, swag stands and concession stands. There are so many dining options to choose from, regardless of what your taste buds may be in the mood for. They also have plenty of allergy-friendly options to meet diner needs. Don't be worried if you're looking for the original popcorn and hot dogs, those are still available, too!

Cheesesteak all the way with peppers and onions

Little Caesars Arena features six types of club level experiences to partake in that all receive VIP parking, concierge service and all-inclusive food and beverages. The most badass (sorry Mom, no other synonym will do) of the six has to be the Comerica Players Club level. This club features a glass lined hallway so you can view the players coming on and off the ice. You can also view plenty of player and team history photos and statistics on the back of the club (in the photo below).  I mean, talk about the ultimate fan experience. In order to take in any of the club experiences, you have to be a season ticket holder. However, if anyone's looking to get rid of an extra ticket over the next few weeks, I'll be in town. Can't hurt to throw that out there, right?! 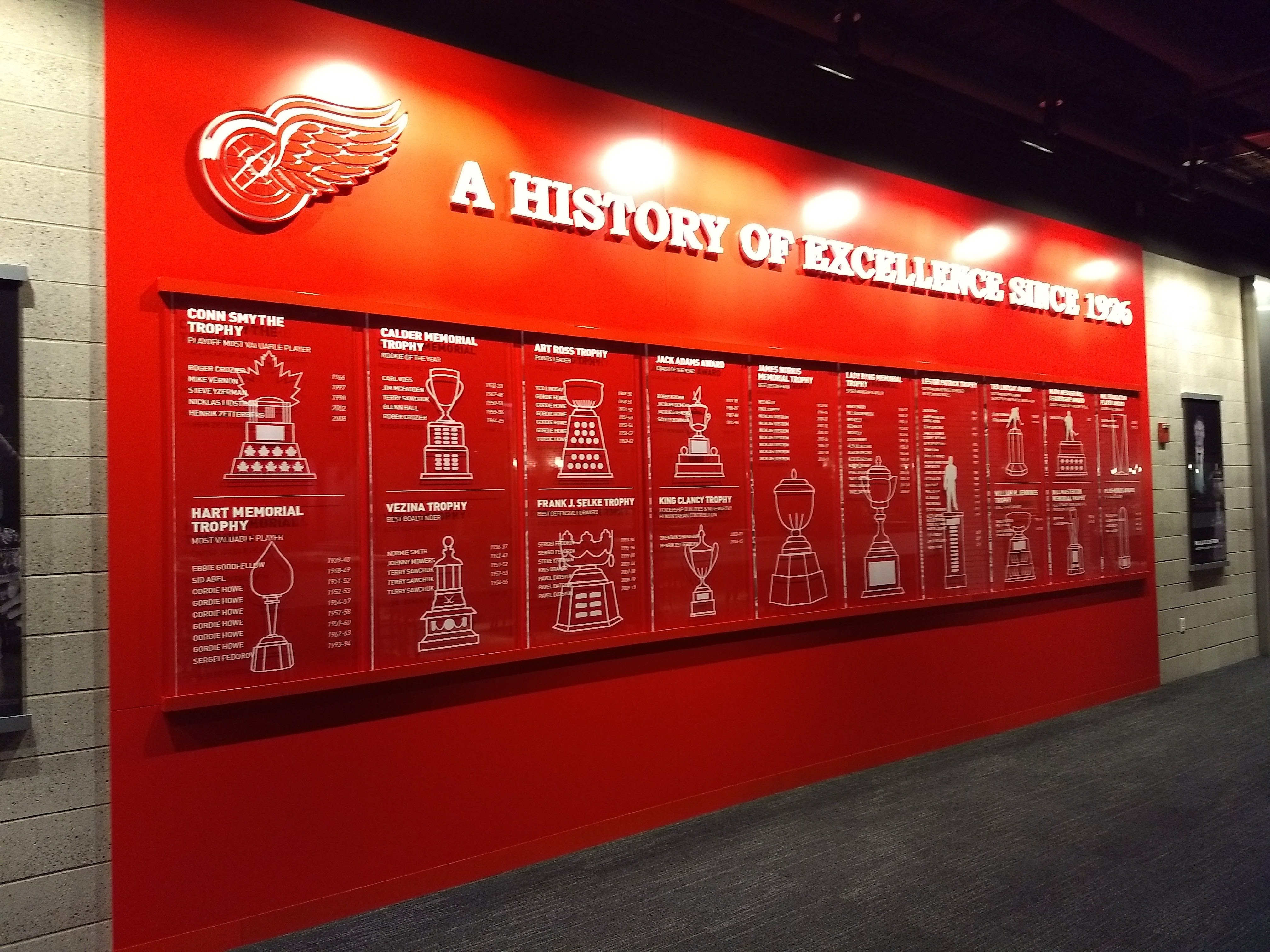 A History of Excellence at the back of Comerica Players Club

Whether you're a Red Wings fan or not, you need to add Little Caesars Arena to your stadium bucket list. The rich history and love of Detroit is clear, as it's been integrated throughout the stadium in the materials used and from the lively people working inside. Lastly, a huge thank you to Mike and Tim for taking time to show us every nook and cranny of Little Caesars Arena on game day. We can't wait to head back!

« Hottest Chefs of the Triangle
School Lunch in Korea »