Going on a tour to see the DMZ (Demilitarized Zone separating North Korea from South Korea) wasn't something I considered doing while in South Korea, both from the theatrics of media coverage and my own personal fears. However, I decided to buck up when my American friends came to visit Korea and invited me along for the tour.

Milton booked our day, which was the Korea DMZ Tour (The 3rd infiltration Tunnel Tour) by Seoul City Tour. This was only a half day tour, even though our course spanned out over seven hours. After having attended this afternoon tour, I really don't know what else I could have absorbed had we stayed any longer. Check out a recap of our stops below along with some snapshots.

This was the first stop, albeit confusing as to whether it was a stop or not. Our guide was friendly, but spoke quickly in English over a pitchy microphone and with many tour attendees' side conversations. We walked down a little pathway along train tracks with the Freedom Bridge to our left and cascades of notes and memories written on ribbon and tied to a fence to our right. We found it comical to find not only a few convenience stores and cafes, but most prominently a Popeyes restaurant. Fried chicken is loved all over the world and the DMZ is surely not excluded. 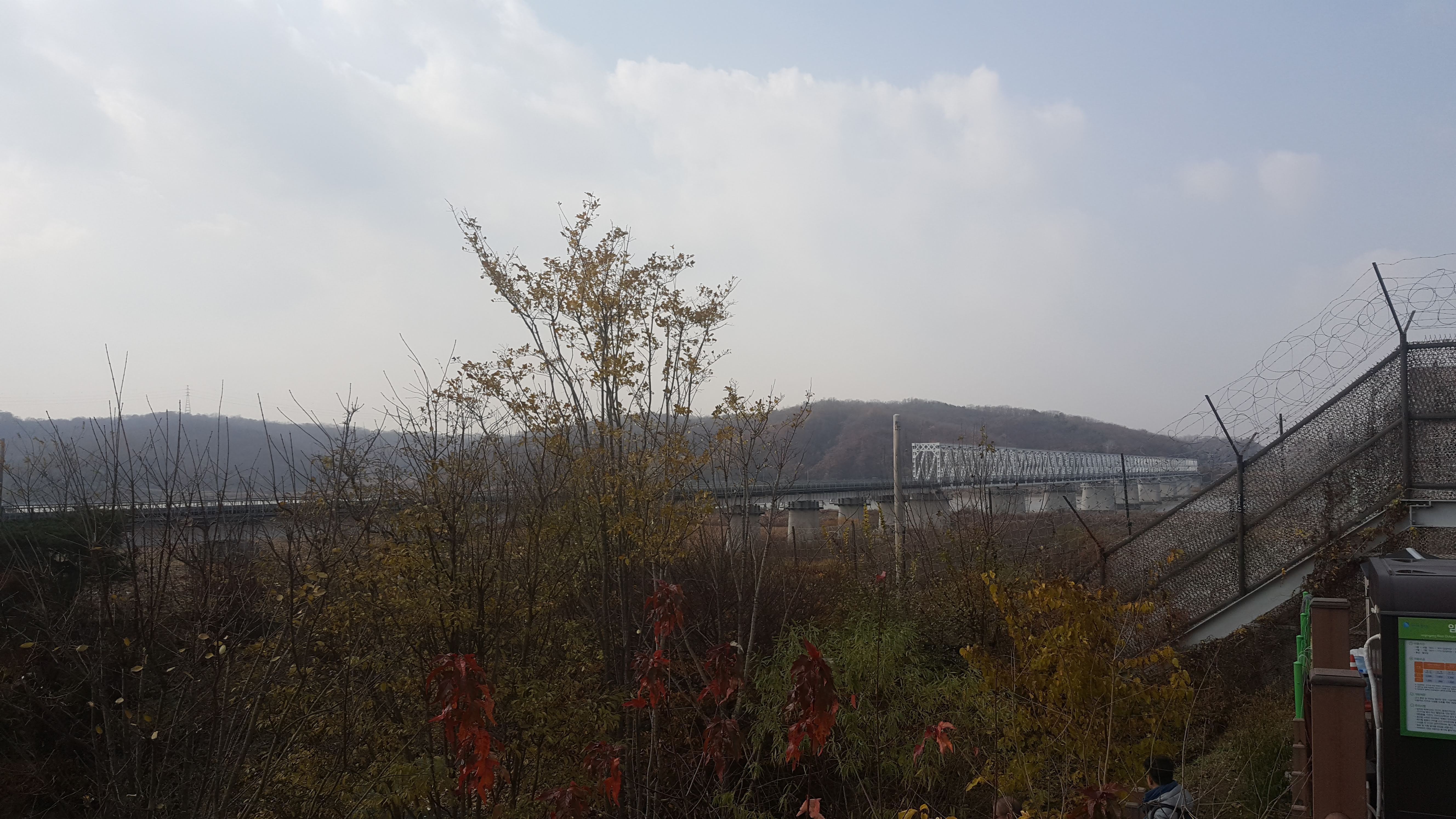 We stepped inside the DMZ Theater and Exhibition Hall to see a scale model of the whole DMZ area mapped out with the different tourist stops/stations we would be visiting along the tour. We then viewed a quick film on the history of the war between North and South Korea. It concluded with South Korea's discovery of four infiltration tunnels dug by North Koreans into South Korean territory. Once the film was over, there was an option to traverse to see the 3rd Infiltration Tunnel, which Milton and Hollis bravely trekked down to see.

The name gives away what we would be doing at this stop and it was a brisk one. We speed hiked up a little hill before making it to the top of the observatory. It was extremely dusty and clouded the day of our tour, so we were only able to see bits and pieces of the "town" stretched along the North Korean border. It was still very surreal to see the mere kilometers separating these two countries and to know we were smack-dab in the middle of it. 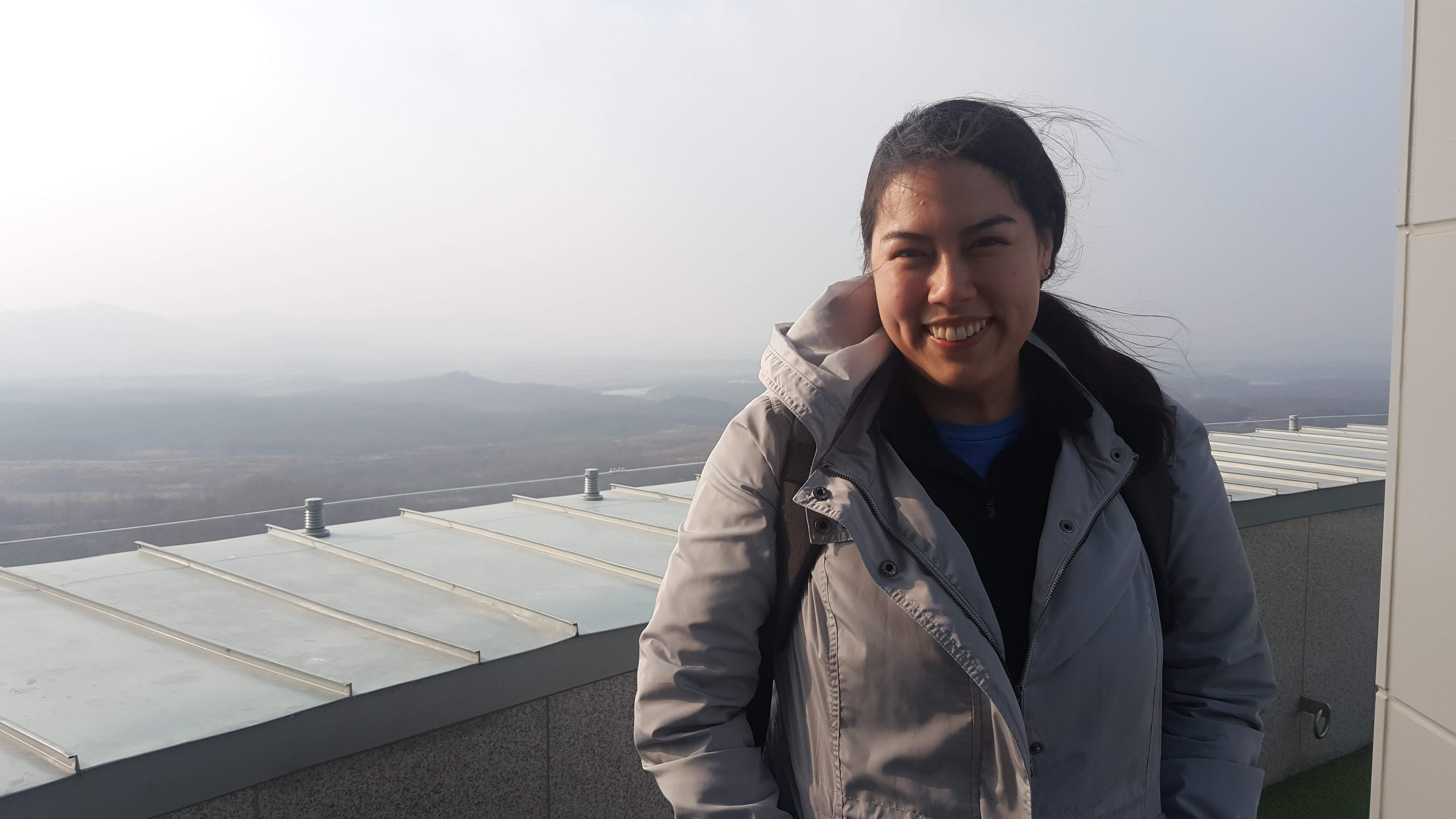 View of North Korea in the background at Dora Observatory

The final stop of the tour was Dorasan Station. This train station is currently for optics only, as it's in hopes of one day uniting North Korea and South Korea through the public transit system. In true tourist fashion, I wanted proof I was there, so I decided to use the provided "passport stamps" to make a little keepsake for myself. Note: Our tour guide said you could stamp your actual passport but I assure you this will count as defacing your passport, so don't do it!

Outside Dorasan Station with Milton and Hollis

It may sound silly, but I was proud of myself for having gone on the tour. I think in light of the recent meetings between South Korea and North Korea, this helped alleviate the initial apprehension I had on the tour as well as dialing back the overall tension between the two countries we experienced on the tour itself. I also became more fascinated with the historical elements involved in developing the current situation between the division of the Korean Peninsula. I have never felt more safe travelling than I have in South Korea and the DMZ tour was no different. It's easy to watch the news and get a very skewed picture of what life in a country is actually like. I'm sure I'm not the only one who has had a positive experience in a country, despite its war and/or political status.

Have you gone on the DMZ tour or something similar in another country? I'd love to hear how it may have changed your perception of your environment. Leave your thoughts in the comments below and don’t forget to subscribe to my blog and check in for my regular posts over on Instagram, Facebook and Twitter.